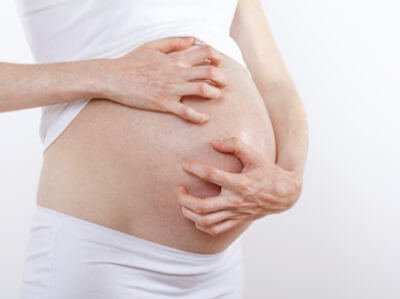 The most commonly reported Intrahepatic Cholestasis of Pregnancy symptom is itching, and in many cases it is the only symptom reported. Itching during pregnancy can vary greatly from one affected woman to another, and it is important to remember that there really is no such thing as typical symptoms of cholestasis. Many times the itching is moderate to severe, but not in all cases. Itching may start mild and progress to more severe as the pregnancy progresses. Some pregnant women have presentations that are more common than others, however.

Some itching in pregnancy can be normal. It is important to remember that some doctors may overlook itching during pregnancy due to Intrahepatic Cholestasis of Pregnancy as it is a normal side effect of pregnancy.

While most women only report itching as a symptom in their ICP pregnancy, there are other symptoms which may occur.

Intrahepatic Cholestasis of Pregnancy sometimes causes pain in the area of the liver. The liver itself does not have nerve endings that sense pain, but the gall bladder, bile ducts, and a capsule surrounding the liver can sense pain. This pain is most commonly felt under the ribs on the right side. Less commonly the pain can be felt radiating to a spot in the back beneath the tip of the right shoulder blade. RUQ pain is not commonly reported because it is often mistaken for pain from the baby pushing against the ribs. This pain can vary. Some women feel a dull throbbing pain, others a sharp stabbing pain.

For some women the pain has been described as debilitating, however it is important to remember that most women with ICP will not feel pain in the area around their livers. RUQ pain can be caused by many things other than Intrahepatic Cholestasis of Pregnancy, and it should always be discussed with your doctor.

There are many biochemical changes which take place in the body during Intrahepatic Cholestasis of Pregnancy. These sometimes cause the urine to become dark. Dark urine may range in color from apple juice-colored to dark brown. This can happen even when water intake is adequate.

Under normal circumstances, bile gives the stool its distinctive color. In some ICP pregnancies, the flow of bile is so thoroughly disrupted that stool appears pale gray, or clay-colored.

Some women with Intrahepatic Cholestasis of Pregnancy find it difficult to eat due to a severe loss of appetite. It can be difficult or even impossible to force down enough food to maintain adequate weight gain. Some women even lose weight despite their best efforts. Others have nausea and/or vomiting.

While it is normal to feel tired during pregnancy, fatigue related to Intrahepatic Cholestasis of Pregnancy can be extreme due to the important role the liver plays in many metabolic processes. This fatigue can be exacerbated due to stress and lack of sleep.

It is uncommon to develop jaundice with Intrahepatic Cholestasis of Pregnancy. It is estimated that 10% or less of women affected by ICP will become jaundiced. However, if you notice a pale yellow color to the skin and/or eyes, seek medical attention.

Mild depression may develop as a result of biochemical changes in the body, hormonal changes, lack of sleep, and/or the inability to escape the itch. Please discuss any depressive thoughts or feelings with your doctor immediately.

Looking for a doctor? We have resources to find help.