Have you ever thought you were going crazy because of something your body is doing that no one else understands? That’s how Intrahepatic Cholestasis of Pregnancy (ICP) felt for me the first time.

I read all the books. I talked to my mom and other trusted family members. I talked to my Air Force friends at the base we were stationed at. The conclusion? Itching was normal. Every pregnant woman goes through it. I just had to tough it out and I’d get this great reward at the end!

However, it got worse. The itching intensified every single day it seemed. The only comfortable piece of clothing was my husband’s bathrobe, turned inside out (the outside was softer, why is that?). Going anywhere was torture, having to put on “real” clothes. I became reclusive, avoided going anywhere so I wouldn’t have to get dressed. I shaved daily. Every piece of hair that wasn’t attached to the top of my head drove me insane.

Do you know what the worst part was? A grain of sand in my bed. One little speck could trigger an itching session that lasted all night. I was ripping skin off my legs and arms. I had scars for about 5-6mos after my baby’s birth from all the damage I did with my nails to my legs. I’d eventually fall asleep in the late morning, passing out from exhaustion.

But this was “normal?” So, I was told. This was in the year 2000. My doctors said I had PUPPPS. I was prescribed every cream and lotion under the sun. I bathed in oatmeal daily. Sometimes twice a day. A nice warm bath, as instructed. (Little did I know this was making it worse!)

Throughout my pregnancy I had gained close to 60lbs. Around the 7-month marker I started losing weight, about a pound a week or so. Sometimes 2 pounds. Again, I was told this is normal. When I went into labor, my official weight gain from start to finish for my pregnancy was about 20lbs.

With all my symptoms and general miserable feelings, they started giving me twice weekly NST (non-stress tests). My very last one was on a Friday. On the following Monday, I was contracting pretty good when I woke up. My husband was working on base, so I had to wait about 30 minutes for him to come get me and drive to the hospital. I, of course, called my mother to tell her the good news. I’ll never forget her having this premonition and asking me “is the baby moving?” I said “well, yea, I think so…” I remember feeling like she’s very big though she’s not got a lot of room to move, but I move and she moves with me and rolls around. Oh ok, my mom says, keep me posted! (We were in Alaska, mom was in Michigan)

We finally get to the hospital, and through a few nurses coming in and out, I get the bad feeling everything was not ok. Finally, one of them said, “let’s get the doctor in here to be sure ok.” This dread just came over me. Doctor confirmed what I had felt, we had lost our sweet girl. I was 38 weeks pregnant. They confirmed she had passed 24-48 hours prior to my going into labor. (So, it’s possible that as little as 24 hours after my last NST test she was gone.) I had probably felt her moving because her body just moved when I did and shifted on its own.

Still in labor, they said I could still deliver her on my own, since it seemed like my body was doing it anyways. I had her about 8 hours later, born into heaven. Emily Rhea. Born July 25th, at 3:09pm, 7lbs 15oz, 21 ¾ inches. The doctor had to break my water, I had none. It was all meconium. When asked if we wanted an autopsy, I said yes, of course! I had to know what was wrong, as they told us she looked normal and her placenta was normal as well. The official cause of death was asphyxia. Probably from aspirating the meconium.

I was heartbroken. Instead of bringing my baby Emily home I went home with polaroid pictures, locks of her beautiful dark hair and a cast of her hand and foot! To not bring a baby home that you’ve carried so long in your body. To be told everything I had gone through was going to be worth it to hold my baby in the end. And it wasn’t. That’s not how it ended for me. I became depressed quite quickly.

A little over a year later we moved back to Michigan near my family. My baby boy was 1 month old! I had a completely “normal” pregnancy with him. Everything went well. He came a day earlier than planned! (We were set to be induced because of my previous loss and not knowing why she had passed so abruptly.)

Fast forward about 5 years. I was at my moms watching “A Baby Story” with her. All the sudden, I saw myself on the screen. A mom with uncontrollable itching. She couldn’t sleep, she was exhausted. She was ripping her skin off from her fanatical itching! My mom just looked at me, and I stared at her, and I said “THAT’S WHAT I HAD!” I knew it, deep down, I knew Intrahepatic Cholestasis of Pregnancy was exactly what I had endured all those years ago and what had taken my sweet baby girl from me. Watching the show, so much made sense. But what really got me was the doctor on the show saying, “you must induce before 38 weeks or the baby has a high chance of mortality”. Hearing those words broke my heart right there, it really did.

In 2012, I remarried. We decided to start trying for a baby. I had always wanted a lot of kids, but at this point I’m getting to that “advanced maternal age” doctors tell you about. So, I’m “high risk” because of my age AND for having such a late term stillborn.

We became pregnant in Dec 2014, and it was the best day ever finding out I was having my rainbow baby girl! At this point I have told my OB my suspicions about my first pregnancy being ICP from having done some research. I actually said to her, please don’t think I’m self-diagnosing or being a doctor google. Please trust me when I say I’ve seen the stories about ICP and it is what I had, no questions about it. And you know what? She believed me! We tested early on and got a baseline for my bile acids levels. In the third trimester, I started itching. This was different, as it came on so fast! I started itching on a Sunday. By the next Monday I had definite elevated bile acids levels and was being induced, at 36+3. 33 hours later I was holding my very perfect little rainbow baby girl in my arms. She was as healthy as could be! The happiest day of my life was that August day in 2015.

In 2017 we again found out we were expecting another baby girl! New doctors again, but with a better history of my issues, we were diligent in testing and assessing all symptoms I showed. My itching began earlier this time. Even on URSO, my levels kept rising.

People asked me why I still got pregnant knowing I was basically “allergic” to being pregnant. I said, because this time, I know what to do. This time, I will bring a baby home with me. This time, I’m older and wiser and can advocate for myself and my baby. I knew so much more having my last two babies than I did the first time.

My girl is a trooper. We were induced at 34+5 this time. My BA didn’t want to behave. It kept going up, even on medicine. My itching kept getting worse. My doctor sent me right to another hospital with a NICU when he saw my most recent blood tests. This last one, this really felt like my first pregnancy. This time my Bile Acids levels were 150+ on 2000 mgs of URSO. I can only imagine what it was with my first baby.

I was lucky enough to bring 2 beautiful girls into this world after having ICP with them. I’m lucky enough to know what I do now to help advocate for other moms to get tested, and share my story so they understand the importance of being tested. 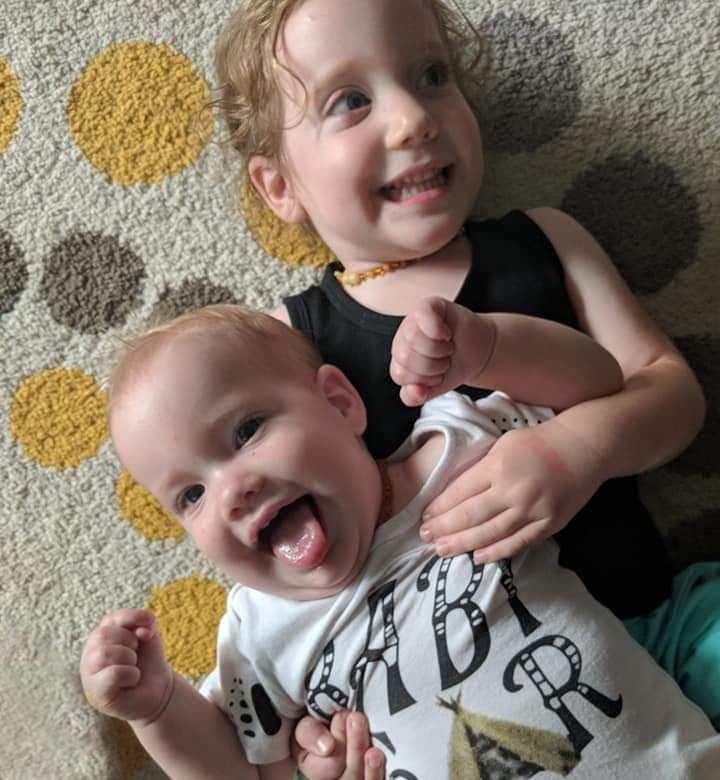