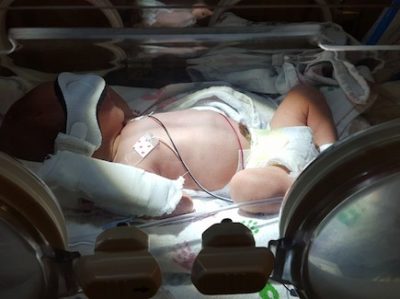 Intrahepatic Cholestasis of Pregnancy (ICP) is a heterogeneous group of pregnancy-specific liver disorders characterized by elevated serum bile acids. ICP should be suspected in cases of pruritis lacking a rash, though it should be noted that a rash may develop secondarily as a result of intense scratching. ICP may develop as early as 8 weeks gestation1, but most commonly develops in the second or third trimester2.

Pruritus – Moderate to severe pruritus is the hallmark symptom of ICP, and in most cases is the only symptom reported. Location and severity of pruritus may vary greatly. The most common presentation is pruritus which is worst on the hands and feet and becomes more intense at night, however, some affected women itch in other locations such as arms, legs, scalp, or all over3. In its most severe form, pruritus may cause scratching so intense as to cause excoriations. Severity of pruritus does not correlate with severity of the disease and may precede any abnormal laboratory findings4. Lysophosphatidic acid is increased as a result of increased autotaxin activity in patients with ICP and may be a mediator of pruritus as it correlates well with the intensity of pruritus5.

The etiology of ICP is complex and not fully understood. Several factors are known or suspected to contribute.

ICP appears to have an increased risk of maternal hemorrhage26. Recent observations of treated populations have shown that coagulopathy is rare in this group3,27, and epidural and spinal anesthesia do not necessarily need to be avoided. Evidence is still accumulating, but it appears that bile acids may contribute to maternal cardiac arrhythmias28,29,30. The most devastating maternal consequence is pruritus, which can be severe.

Etiology of stillbirth is poorly understood. Bile acids have been shown to induce arrythmias in fetal heart cells61, cause vasoconstriction of chorionic veins62, and cause changes to the placenta including premature aging. A 37 week placenta in an ICP pregnancy has been shown to have significantly more syncytial knots than a non-ICP placenta63,64. ICP is also associated with decreased levels of placental ADAMTS-1265 and decreased expression of placental 11βHSD266 which is known to have a protective effect, preventing excess fetal exposure to maternally produced cortisol.

ICP is a risk factor for the development of gestational diabetes and/or preeclampsia31,88. Proteinuria usually precedes elevated blood pressure in cases of preeclampsia secondary to ICP, and routine screening of moderate and severe ICP patients is suggested89.

In most cases symptoms disappear within 48 hours of delivery. There are case reports where symptoms have lasted much longer, as many as 82 weeks postpartum90. Follow up testing is recommended for all patients at 3-6 months postpartum91. If laboratory parameters do not return to normal within 6 months, further investigations should be pursued to determine if there is an underlying condition which may have contributed to the development of ICP92. Prognosis for the majority of women affected is very good. Recently it has been suggested that women who suffered from ICP may be at a slightly increased risk for developing biliary tree cancer, diabetes, and autoimmune diseases93. The risk of cancer is thought to be a consequence of the relationship between hepatitis C and the development of ICP and not a process of ICP itself. A large study found that long term liver-related diseases were rare, with the exception of cholelithiasis and cholecystitis92. One study examined 18 female and 27 male children of women who were affected by ICP in their pregnancies. In this study a small but significant risk of metabolic disorders such as increased hip girth or diabetes was found. The pregnancies in this study received neither medication nor active management94. However two larger studies examining 187 women95 and 138 men96 born to women who were affected by ICP failed to find any impact on the long term health of the offspring.

Low stillbirth rate with treatment until BA >100 Meta-analysis found stillbirth rates in treated ICP are not increased until bile acids reach 100. 25-30% of women in the study with mild ICP were delivered early, which would theoretically reduce stillbirth in this group. US researchers have taken this as evidence that the current treatment practices work in cases where bile acids are under 100.

The placenta is a substantial producer of lysophosphatidic acid…and this is markedly increased during ICP pregnancies. This may play a role in pruritus.

A retrospective cohort study examined 186 singleton pregnancies affected by ICP between the years 2005 and 2013. In 2009 a new management strategy for severe ICP, including 36-week delivery, was implemented. Stillbirth was significantly reduced in the newer cohort (0% versus 3.4%). There was no increase in cesarean delivery or NICU admission.
Kohari KS, et al: Outcome after implementation of a modern management strategy for intrahepatic cholestasis of pregnancy. J Mat-fetal & Neo Medicine 2017;30:1342-1346.

Plasmaphersis – Plasma exchange has been demonstrated to reduce pruritic symptoms, possibly by reduction of autotaxin activity or removal of pruritic agents. Its effect on bile acid levels is inconsistent. Since it is invasive it should be limited to the most severe cases, refractory to treatment with drugs.

A retrospective cohort study examined 186 singleton pregnancies affected by ICP between the years 2005 and 2013. In 2009 a new management strategy for severe ICP, including 36 week delivery, was implemented. Stillbirth was significantly reduced in the newer cohort (0% versus 3.4%). There was no increase in cesarean delivery or NICU admission.
Kohari KS, et al: Outcome after implementation of a modern management strategy for intrahepatic cholestasis of pregnancy. J Mat-fetal & Neo Medicine 2017;30:1342-1346.

Maternal 911 online multi-module course designed to provide updated education to all health care providers working at the bedside of a pregnant woman. Continuing Medical Education credits will be awarded upon successful completion of the modules and simulation drills from Michigan State University College of Human Medicine. The Maternal 911 module will provide details on ICP – Intrahepatic Cholestasis of Pregnancy for early recognition and lead to appropriate care for the woman.